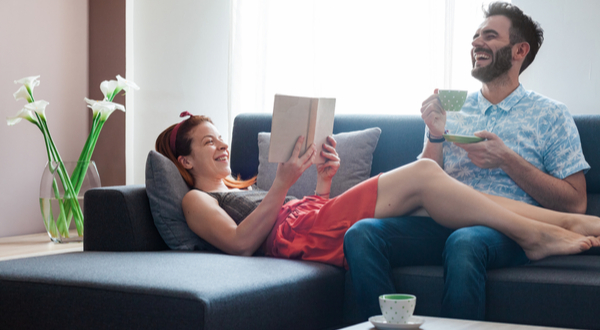 On Goodreads, a site that allows users to track books they read or want to read, books are assigned to a category by the reader. Books tagged as “self-help,” “biography,” “memoir,” and “autobiography” are read by mostly women, with “self-help” having the highest percentage of women readers. Books tagged with “psychology,” “business,” “science,” “philosophy,” and “religion” have more male readers. [1]

Why Are Women Reading Self-Help Books?

About three-fourths of self-help books about relationships and marriage are bought by women. Why is this the case? After all, in heterosexual partnerships, women are only one-half the relationship.

Self-help offers the promise of being “better”—better at sex, better at managing the relationship, better at cleaning, etc. There is tremendous allure in the idea of becoming a better person with the help of psychological expertise. [2,3]

Agents and publishers know that when there is a relationship problem or issue, it is often the woman who blames herself. The billion-dollar self-help industry, in many cases, essentially presents women as flawed, and responsible for fixing themselves. These books are offering a solution to the so-called “flawed” woman. [4]

What is Happening in Marital Relationships Now?

As a result of the pandemic, women have been leaving the workforce (in staggering numbers) because of businesses closing and the closures of schools and day-care centers. The result is that the typical “over-functioning” (the nice way of saying “doing everything”) woman is doing even more.

Most women hoped their partners, many of whom are also at home, would take the opportunity to step in as a “co-parent” and “co-housekeeper,” sharing the emotional work of being a family. For many women, it is not happening the way they hoped.

Studies have shown for years that marital satisfaction decreases over time, particularly for women. And it is usually women who seek change in a marital relationship. Men tend to prefer the status quo. One recent study showed that if their desired egalitarian marriage could not be achieved, women would choose not to marry, while men preferred to return to a traditional arrangement with paid work as their primary contribution to the marriage and family. [5]

What Do Women Want in a Relationship?

Be Cautious About Relationship Self-Help Advice

Yes, many women are still looking for help with their relationships and marriages. But it’s wise to be careful consumers of the advice offered. Here are four kinds of advice that self-help books offer that I think you should be cautious about:

Let’s take a look at how these issues are not really helpful in dealing with relationship issues.

The classic relationship self-help book that takes this position is John Gray’s Men Are From Mars, Women From Venus, published in 1992. Men and women both read millions of copies of this book, which is still touted by academics and relationship gurus alike. This book emphasizes traditional gender roles for husbands and wives, even those most people are looking for a more egalitarian relationship (even if we do not want to call it that). It’s also relevant to add that Gray received training from a yoga master and received his degrees from now-defunct educational institutions. Be sure to check the credentials of the self-help authors you read. [6]

One legitimate academic, Deborah Tannen wrote You Just Don’t Understand that proposes that our relationship problems are because partners talk differently from one another—again, with the idea that marital problems are because men and women are different. A critique of her work by other academics notes that she emphasizes the importance of women adjusting to men’s demands for status and independence. This is an example of a person of authority buying into the old gender stereotype that women must defer to men in order not to threaten their egos. [7]

Does “Tit for Tat” Work in Relationships?

Too much of the self-help literature relies on the notion that a relationship is about each person fulfilling the other’s needs. Be aware that this idea is based on the view that we are all motivated primarily (or only) by self-interest. It’s the business model of marriage.

John Gottman, a well-known psychologist who publishes both self-help books and scientific articles, argues against the idea that good marriages are based on the idea of reciprocity or “tit for tat”: i.e.“You do the vacuuming and I do the yard work.” More often the agreement will be unwritten and unspoken, which requires keeping a mental tally on who has done what for whom, building resentments about who is doing what. [8]

Are Women “Flawed” and in Need of Help?

Publishes know that women often have self-esteem issues. When a woman has a relationship issue, she is highly likely to blame herself. Thus, they publish books that cast blame while offering a solution. “You are flawed but fixable—if you just read this book.”

Too often, self-help will only reinforce a woman’s sense that there is something wrong with her. It is as if she says, “Wow, look at all of this stuff I am not doing. I’m a bigger loser than I initially thought.”[9]

One recent commentator noted that self-help is morphing into self-care, particularly for women. While self-help emphasizes hard work, self-care emphasizes newer, kinder, often weirder advice. This new approach has not been critiqued sufficiently to assess its usefulness. [10]

If you change yourself, will your relationship be better? While such change, whatever it is, may enhance you, it may not affect the relationship. Your partner or husband may like the status quo. Even asking for a change in the relationship may be enough to provoke his resistance to any such change.

John Gottman’s research showed that over 80 percent of the time, it is the wife who will raise a marital issue. [11] Such requests (like “Can we talk about __________?”) can result in what Gottman calls the Four Horseman of resistance: stonewalling, defensiveness, criticism, and contempt . These are the typical tactics resistant partners use when their (partners) approach them with a request, complaint, problem, or issue.

Self-help books are widely read and highly valued, mostly by women. They allow someone to access a lot of good information that can be personally helpful at little cost—unless we become dependent on the very idea of self-help. Be critical of the advice and the advisors!

7. Aponte, C.E. A Marriage of Equals: How to Achieve Balance in a Committed Relationship. Berkeley, CA: She Writes Press, 2019.

Alia Bhatt keeps it strong with shoulder opening yoga pose, read all about it here | Health

How to Really Engage Your Core Muscles, According to a Yoga Expert