Holding a full-time job with a logistics company in Wood Dale and being a musician in a rock band in his free time took a toll on the 24-year-old body of Matthew Daniels, who tried to eat healthy and stay fit.

“I was working 50 or 60 hours a week, and touring 180 to 200 days a year,” says Daniels, now 27, who grew up in Elk Grove Village and was the driving force behind the Chicago-area band Remada. He remembers weekends when he’d finish his regular shift on Friday and drive straight through the night to a gig in Texas, where he’d perform and drive back.

“I’d pull in to work Monday morning in my stage clothes,” says Daniels.

When the pandemic shut down live music, Daniels turned his interests in fitness and music into his new business, the newly opened Royalty Health & Fitness at 820 E. Nerge Road in Roselle. He built it with help from his parents, Jeff and Maria, brothers Josh and Zach, and friend Mandy Humphries. The center includes state-of-the art gym equipment and weights but also features a concert-quality sound system, guitars on the wall and music lessons.

“It’s like my man cave,” says Daniels. “The bodybuilding community loves metal and rock music. When you’re in here, you feel the bass.”

Having played baseball, football, basketball and hockey, as well as violin, as a kid, the 6-foot-2 musician started his Royalty Health & Fitness business years ago with an app that helped people improve their fitness.

“I wanted people to feel like kings and queens,” Daniels says, explaining how he chose the name. When he played with Remada, he was a leader in the Music Heals movement, dedicated to promoting mental health awareness.

His own health and fitness took a turn for the worse in 2017.

Following one 15-hour drive after playing a show in New York, Daniels was exhausted and his back was so sore he went to his doctor’s office. When a doctor suspected meningitis, Daniels was given a spinal tap that didn’t go well. He didn’t have meningitis, but the puncture in his spine didn’t seal properly, leaving him with severe headaches, and so weak he couldn’t walk or eat. Even after another treatment sealed the puncture in his spine, bright lights bothered him.

“Well, there goes my career,” he remembers thinking. “But I was still doing shows. I was wearing sunglasses at night because the lights were too bright.” 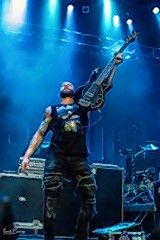 Playing guitar on tour with Shallow Side, Elk Grove Village native Matthew Daniels had to stay in good health physically and mentally. He recently opened a gym and fitness center in Roselle.
– Courtesy of Sarah Carmody Photography

That work ethic helped win him a spot as the bass guitarist with the Alabama-based touring rock band Shallow Side. On the road with them, he took better care of himself. It got to the point he brought his own fridge and meal plan on tour, he said.

“With me, fitness has been such a mental outlet, and music is the same outlet for the arts,” Daniels says.

After his medical emergency, Daniels lost about 50 pounds, his muscle tone vanished, and he felt sluggish and tired, he says. By studying nutrition and fitness, and devoting himself to getting in shape, he’s gained back weight and muscle. He says he feels better than ever and wants to help others by planning unique fitness programs to match a person’s needs.

“They can come in, and I can help them change their lives,” he says.

When he was 14, Daniels wrote a letter to his future self, urging him to work hard and follow his dreams. He says he still takes inspiration from that letter.

He hopes to feature some live music in his gym. He has no plans to tour now, but he says music will always be a major part of his life.

“The biggest thing I miss the most is seeing the effect the music has on the people,” Daniels says, adding that songs can transport you to a different time in your life. “You think of the way that song made you feel.”

He credits music and fitness for helping him overcome obstacles and make his dreams come true.

“Fighting through the battles made me who I am today, and the musician I am today,” Daniels says.