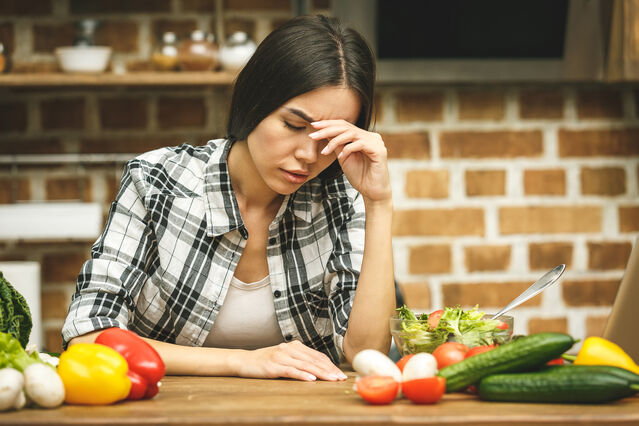 A few years ago, I fell down a rabbit hole of specialized diets when mainstream medicine couldn’t fix my chronic weakness and fatigue. The initial food restrictions seemed to provide partial relief but didn’t eliminate my symptoms, so I doubled down and added new restrictions to my already restrictive plan. If I could just avoid all the “culprit foods,” I thought, my health would be restored.

Eventually, I was eating nothing but meat, fish, specific vegetables, and olive oil—no grains, dairy, eggs, fruit, beans, and many other categories of food. Even the few foods I ate didn’t feel entirely “safe” as I was constantly on guard against eating the wrong thing.

“It is true that different foods react differently with our digestive system,” said Dr. Melissa Hunt, a clinical psychologist who specializes in treating individuals with irritable bowel syndrome (IBS) and related conditions. “But people will start to engage in extremely restrictive dieting. And this is a very bad path to go down.”

Hunt acknowledges that diet can play a role in relieving certain health conditions. “There is one empirically supported diet [for IBS] called the low FODMAP diet,” she told me. (Of course it was one I had tried, more than once, since it’s often recommended for other health conditions.) And while the diet can be helpful, it’s “incredibly restrictive,” according to Hunt. “It eliminates all dairy, all legumes (so it’s very difficult to follow if you’re a vegetarian), wheat, a lot of fruits, and quite a few vegetables—including all onions and all garlic.”

Part of the problem with restrictive diets is that they often work—at least temporarily. “When you go on the low FODMAP diet, your symptoms do reduce,” said Hunt. But there’s often a cost. “The problem is that you’re actually starving all the symbiotic bacteria in your gut,” she continued. “So, for example, after 6 weeks on the diet, all your Bifidus bacteria die because they have nothing to eat.” As a result, reintroducing foods is highly likely to trigger a negative reaction—not necessarily because the food was inherently problematic, but because of changes brought on by abstaining from the food.

Stress and Fear of Food

Diet often gets blamed for our nonspecific or unresolved health struggles—an understandable belief given that it’s something we can control. But, in reality, there are many factors that affect our day-to-day health, including our stress levels—and trying to figure out all the foods to avoid is a stressful way to live (as I know from personal experience), especially when different diets often give conflicting advice about what to avoid.

“I’m certainly not saying that diet has no impact on health and digestion,” said Hunt. “Of course it does!” As she spells out in her books on IBS and inflammatory bowel disease, some people must avoid particular foods, like gluten for those with celiac disease. “But people become really, really paranoid about accidentally consuming one of their trigger foods,” said Hunt. When we have a flare-up in symptoms, which may have nothing to do with diet, we’re likely to beat ourselves up and think, “I was bad. I ate the wrong thing.”

No matter what health condition you’re trying to address, excessive stress will make it worse. Stress will also interfere with healthy digestion as it turns off the parasympathetic nervous system that allows us to “rest and digest.” When I started eating a wider variety of foods, mealtimes were no longer fraught with risk and anxiety.

Staying on a highly restrictive diet long-term also “really limits your life,” said Hunt. Food is central to many social gatherings, so restrictive diets can make it difficult to share time with others. Fear about what will be on the menu often makes it easier to just stay home. “Basically, if you’re on this diet, you can’t ever eat out,” Hunt said of the FODMAP diet. It’s also much harder to travel with food restrictions because we can’t guarantee that there will be “acceptable” food choices when we’re away from home.

If you’ve found a diet that works for you or that your doctor recommended, by all means, continue to follow it. But if you’re feeling stressed out by a diet that you’re not even sure is helping, consider the simple guidelines Hunt recommends (which the vast majority of specialized diets agree on):