The road to self-improvement gets even rockier if the people around you are dragging you down.

This was the larger message in the Season 1 finale of BET+’s The Ms. Pat Show, which was titled “Don’t Eat that S–t.” The installment began with Ms. Pat’s husband Terry trying to eat better and encourage her to do the same. She agreed, but kept sneaking to eat sweets when he wasn’t looking. In an attempt to keep the peace, their daughter Janelle intervened and ate a slice of carrot cake that was tempting both of her parents.

Terry also invited Ms. Pat to join him for his therapy session. Ms. Pat fought the suggestion at first, but she joined him and wound up having at least two breakthroughs. Shocked that therapy actually works, Ms. Pat thanked the shrink and Terry for the touching moment of self-reflection and honesty. Afterward, the therapist urged Terry to tell Ms. Pat what was on his mind — and that is when Terry confessed that Denise living with them was stressing him out. 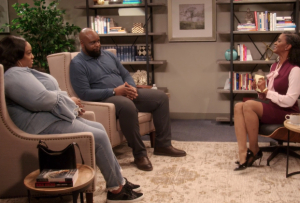 Initially, Ms. Pat argued that Denise wasn’t so bad, because she’s her sister. Terry then pointed out all of the childish things Denise did on a regular basis, such as forgetting her door key, and Ms. Pat conceded that they would talk to her. Of course, everything fell apart when the couple got home and learned that Janelle had accidentally consumed a pot brownie that Denise left on the counter. (Janelle ate the brownie because she thought she was helping her parents avoid their junk-food temptations and didn’t know it had marijuana in it.)

The brownie was only there, of course, because Junebug had tried to buy weed off of a local dealer and stupidly bought a baggie of parsley instead. When Denise confronted the dealer (a punk kid named Squid), she demanded her nephew’s money back, but he didn’t have it so he gave her the brownie, which she absentmindedly left unattended. 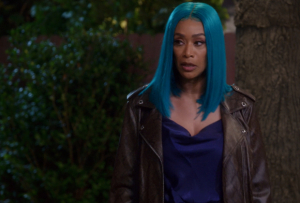 With every detail of the story, Terry and Ms. Pat grew angrier, but they chose to focus on making sure Janelle was going to be alright. The next day, Ms. Pat and Terry tried to figure out what to do about Denise. Terry agreed not to kick her out, but instead lay some ground rules she could follow. Unfortunately, when Denise got home from work, she responded defensively before Ms. Pat and Terry could even make suggestions, and Ms. Pat snapped.

She screamed and cursed Denise for not being a better sister and aunt and told her to get out. Denise fired back and reminded Ms. Pat that she used to be a drug dealer and had only turned her life around after Terry “saved her.” Ms. Pat grew more enraged and called Denise, a recovering addict, a crackhead. 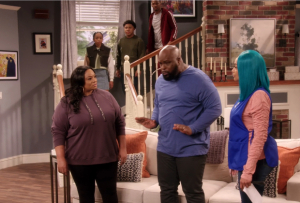 Terry and the children’s attempts to calm Ms. Pat and Denise fell on deaf ears. Denise stormed out with the help of Ms. Pat pushing her out — it was a bit of both — and the finale ended with Ms. Pat fuming and Denise crying on the porch, throwing a chair at the front door, and eventually walking away.

What did you think of the The Ms. Pat Show’s finale? Do you believe Ms. Pat and Denise can patch things up if there is a Season 2? Grade all of Season 1 in our poll and drop your thoughts in the comments.